We understand that new parents often feel unsure of how to properly care for their new baby’s gums and new teeth. Please refer to the following sections when confounded with questions on how to keep baby’s teeth healthy to learn more about oral health and prevention for Casper, WY pediatric dentistry patients.

Teething can often lead to oral discomfort, irritability, mild fever, and excessive salivation. Oral pain relievers such as OTC children’s Tylenol, Advil, or Motrin can help relieve symptoms. Increased fluid intake will help with any dehydration. Chilled teething rings can be used for palliative care. Light pressure on the gums usually assists the teething process and can be stimulated by the use of a finger cot or vibrating teething device. The use of topical anesthetics, including Ora-gel, to relieve discomfort should be avoided due to potential toxicity of these products in infants. 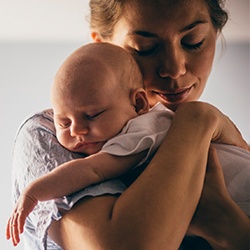 If your child requires naptime or bedtime bottle-feeding, the infant should be held by a parent while feeding with the bottle. When finished, your baby should be placed in bed without the bottle and his/her teeth wiped off with a clean, moist (paper) towel. Xylitol wipes are also recommended. If there is a need for additional sucking, a pacifier is preferable to the bottle. If prolonged use of the bottle is required, its contents should be limited solely to water. A prolonged nighttime bottle habit can have significant deleterious effects to your child’s teeth.

Breastfeeding and Your Child’s Teeth 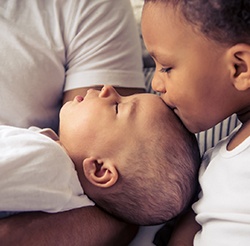 Once your child’s teeth begin to erupt, studies have shown children who continue to breastfeed up to 12 months of age are less likely to get cavities. However, breastfeeding has shown to cause more tooth decay if practiced throughout the nighttime after the age of 1. 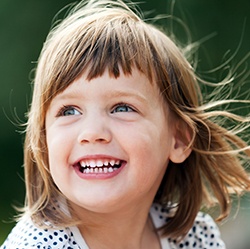 As your child begins to eat solid foods (which usually coincides with the time he/she is getting teeth), limit snacking frequency and high carbohydrate foods that stick to the teeth for long periods of time like gummies, candies, and even crackers. Consistent use of a sippy (training) cup and frequent in between meal consumption of sugar-containing drinks (eg. Juice, formula, soda) also increase the risk of dental caries. The use of a sippy cup should begin around 8-12 months but should only be used until your child can safely handle a drink on his/her own. Juice or soda should not be introduced to infants before 1 year of age, intake should be limited to less than 4 oz. for children 1-3 years and less than 6 oz. for children less than 6 years of age.

Brushing twice daily (morning and night) should begin as soon as your child’s first tooth erupts. A wet soft-bristled toothbrush with a rice-sized smear of toothpaste should be used at first; but after the eruption of your child’s second primary molars (24-28 months), move up to a pea-sized amount of toothpaste. Close attention should be paid to the chewing surfaces of your child’s molars and around the gumline of his/her upper anterior teeth. Use ANY fluoridated toothpaste (Tom’s of Maine is not fluoridated) that your child ENJOYS using. Around 1.5-2 years of age, many children become stronger and object to brushing. Persistence is recommended. With time, brushing becomes an accepted part of every child’s daily routine. We recommend that you brush your child’s teeth until he/she is 6 years old. Your child has the dexterity to begin brushing alone as soon as he/she can tie his/her shoes.

Flossing is most important after the eruption of your child’s second primary molars (24-28 months). Interproximal (in-between) tooth decay between children’s molars is one of the most common areas for early dental caries. Also, children whose teeth are crowded will benefit from early flossing, as toothbrush bristles cannot reach between crowded teeth. Flossing is also important to clean plaque and bacteria from underneath the gumline and prevent gingivitis. 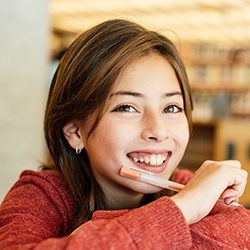 Optimal fluoride supplementation (0.7 ppm) has been shown to significantly decrease caries prevalence. Casper’s water supply (0.3 ppm) is only about half of the optimal amount. Dr. Paulson recommends supplementation with a once daily chewable fluoride tablet after the age of 3 for patients who have a high caries risk. Ask for a prescription recommendation at your next visit.